WE LOVE WHAT WE DO.
IT’S OUR PASSION.

In 1973 Stuart and Ellis formed North Leicester Motors ltd, a local car garage and Petrol station in Ellistown. This quickly became North Leicester Motorcycles and sold new MZ’s and various small bikes, it wasn’t long before the Italian bikes started to become the core passion of the business with new Morini, Guzzi and Ducati filling the showroom.

The late 80’s and early 90’s saw a brief flirt with Japan in the form of a Kawasaki Agency but Stuart’s passion was with Italian machinery so a decision was taken to remain independent of Japan and focus on used Italian machinery .The business went on to become synonymous with the marque  Moto Morini for which NLM was the world’s biggest supplier of bikes and spare parts. This remained the core of the business for some 20 years plus and North Leicester (NLM) gained a global reputation as honest and reliable.
‍
Ellis took retirement many years back which left Stuart at the helm for the last 15 + years but he too was now in the market for a quieter life which put the emphasis on his son, Chris, to take over. Having just turned 40 and been involved with the business in one way or another for the majority of his life is was an obvious move for him to take over. Arrangements were made late 2018 for the company to be taken over by Chris from January 2019.

The  new broom  swept clean so the company underwent a huge transformation and was re-branded Lusso Veloce Ltd as NLM didn’t shout exotic Italian It simplified the running of the company as there would now only be one senior member of staff. Morini parts were sold to Mdina Italia to sit alongside their Ducati parts as this seemed a smart move for all involved.2019 has seen a fantastic year for Lusso Veloce and it has undergone much change with the buildings  renovated and a lift installed to take motorcycles up to the first floor creating a large additional showroom where the parts used to be kept. Cars are joining the bikes downstairs where only bikes used to sit. The introduction of cars is something that has really happened organically as many existing customers have cars as well as bikes, and both Stuart and Chris are passionate classic car enthusiasts as well as life-long motorcyclists.

With Stuart keeping a watchful eye over proceedings on a part time basis, Chris is really driving things forward and is very passionately growing the business in its new form. The future promises to be a really exciting time for all involved at Lusso Veloce. 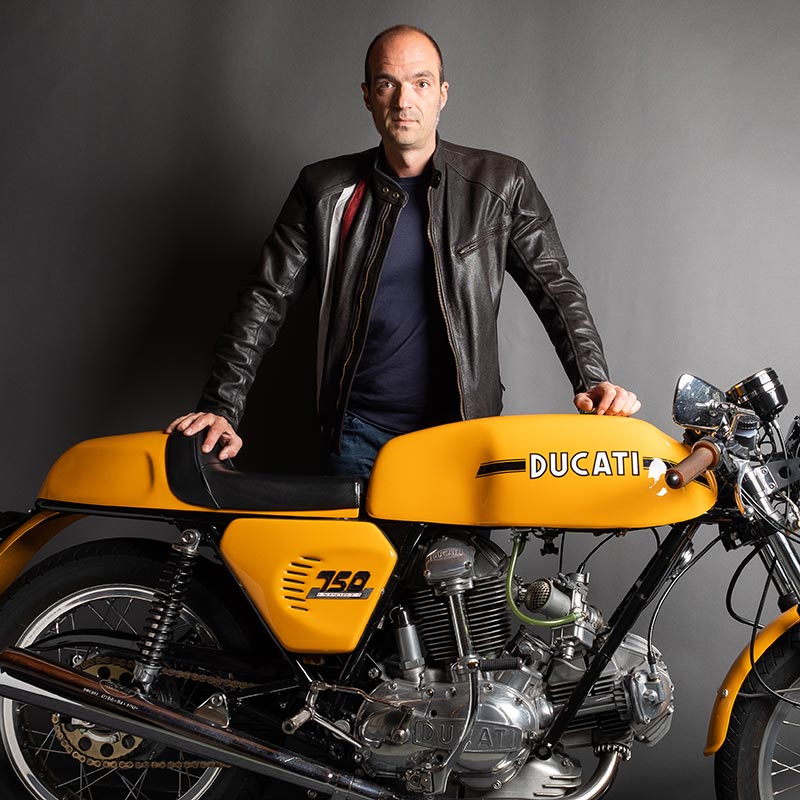 Management
Having taken over from Stuart in January 2019 and managed the re-brand into Lusso Veloce, Chris is now the driving force behind the growth and success of the business. Not only has he been involved at NLM, he has had a lifetime of experience in the motorcycle industry, working at; Bimota factory, Close Bros Merchant Bank, Hein Gericke Franchise and Sony. He has a wealth of knowledge to bring to the fold and has certainly hit the ground running with Lusso Veloce in 2019. Chris still races competitively at national level and has a strong track record on 2 wheels. 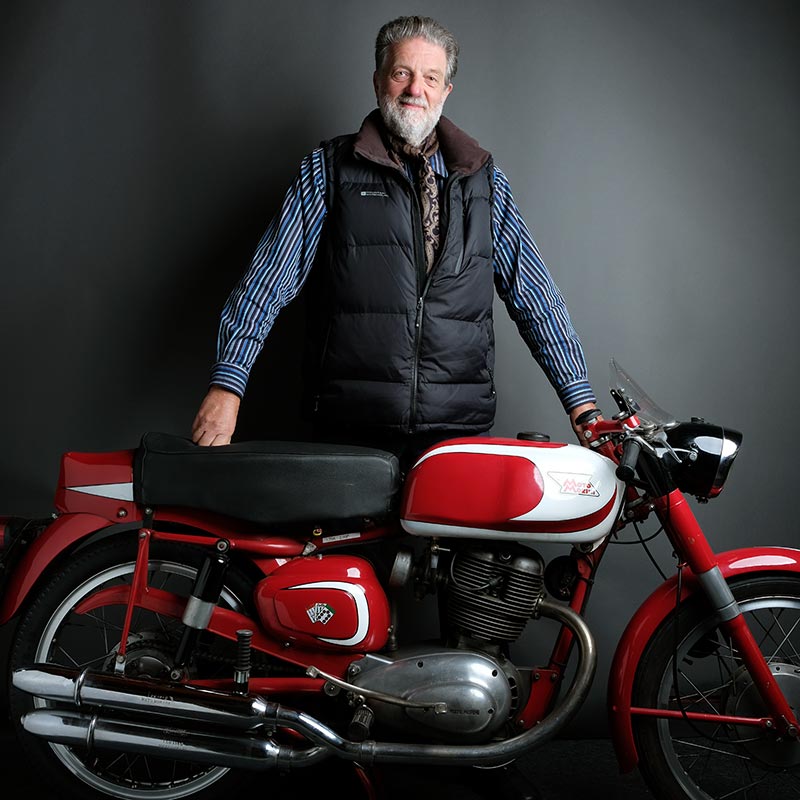 Management
The Founder of NLM with some 45 years plus experience of selling Italian motorcycles, Stuart is now keeping a watchful eye over proceedings at Lusso Veloce. Stuart started out in the motor industry around London dealerships and rose to Sales Manager at the Chequered Flag where he was selling iconic cars such as, Lancia, Scimitar, Aston and Mercedes. He then headed north to start a family and his own dealership. Whilst somewhat reluctant to embark on the huge changes to his beloved NLM Stuart is now enjoying watching the growth and success of Lusso Veloce. 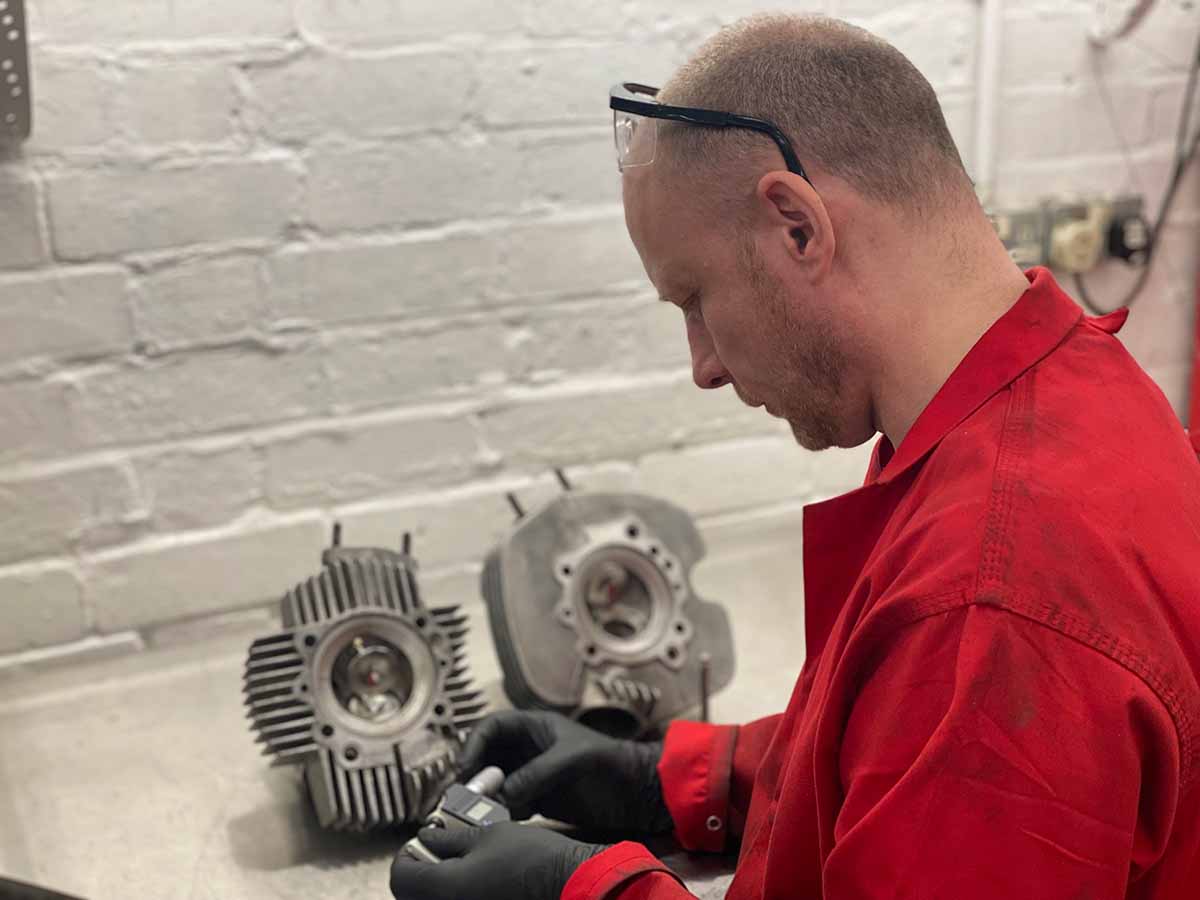 Technician
With over 20 years experience in the motorcycle trade Simon has amassed a wealth of experience working on almost all marques of machines, factory trained Yamaha, Suzuki, Aprilia, Kawasaki, KTM and many more he is incredibly knowledgeable and fastidious. These days he has earned the title of Desmo as he spends much of his time shimming and servicing the many Ducatis that pass through our hands. 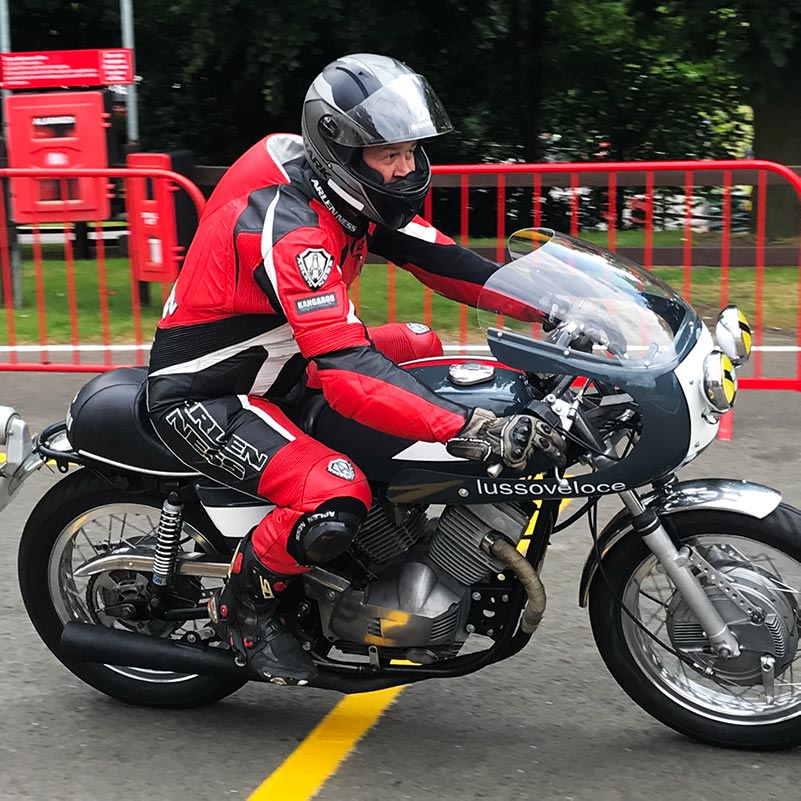 Technician
Originally trained as a design engineer, Struan’s passion for motorcycles drove him to owning his own Honda dealership where he gained a reputation of being able to fix anything, not just with the general public, but with Honda UK and HRC. He continues to be in great demand and sometimes has to head off and help out at special events and tests for Honda. His area of knowledge is vast from Vintage to modern and from British to Italian through to Japanese. Struan’s passion and knowledge for motorcycles is second to none and his standard of work is flawless. It is most fortunate to have him working at Lusso Veloce. 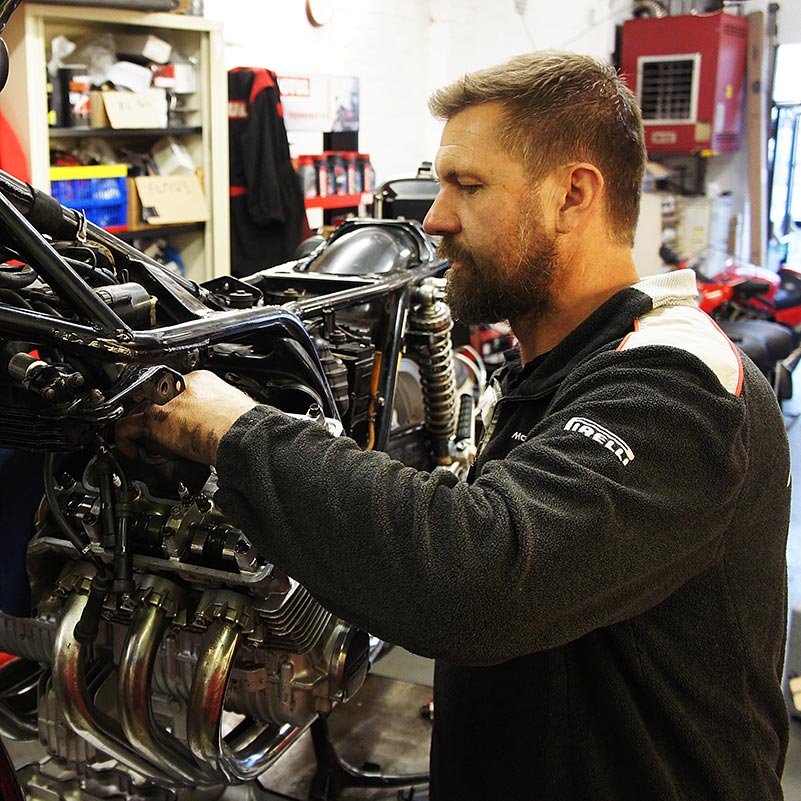 Technician
Volker’s background is in car racing and at the weekends he can be anywhere in the world working in the pits of a GT car or endurance race. His CV is like a car enthusiasts dream, with time spent at McLaren, Mercedes, Sauber, BMW to name but a few, working on a variety of machinery from F1 to touring cars. The last couple of years he has been working in world endurance with Nissan but during the week you will find him working in the workshop at Lusso Veloce on both bikes and cars, as he too is a motorcyclist. 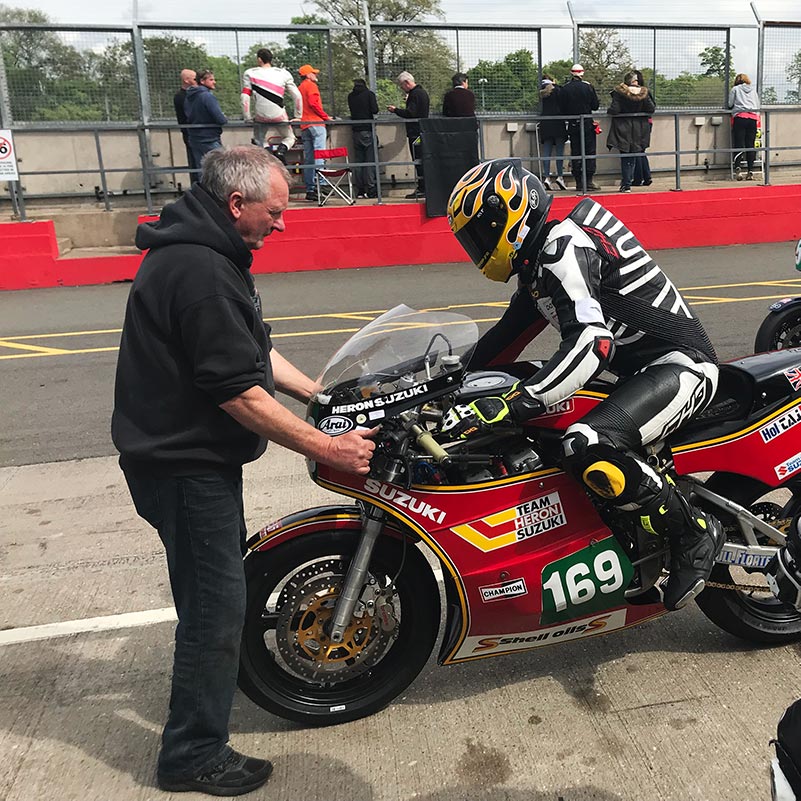 Technician
Starting out as a transmission specialist building race gearboxes, he then went on to work alongside John Hackett (JHP) and became Corse trained building a huge knowledge of Ducati and Ducati race bikes to add to his already vast experience.Kev is passionate about bikes and in particular race bikes and we have lost count of the amount of championships his engines have won; we think it’s around 20! He has prepared bikes and built engines that have won races at world level and he has worked with riders like Luke Mossey, Richard Cooper and Jakub Smrz. Still working in the BSB paddock, Kev often spends midweek in the Lusso Veloce workshop.
Let's talk

If you are interested in our stock, or if you are looking for something specific - just drop us a line.
Contact US